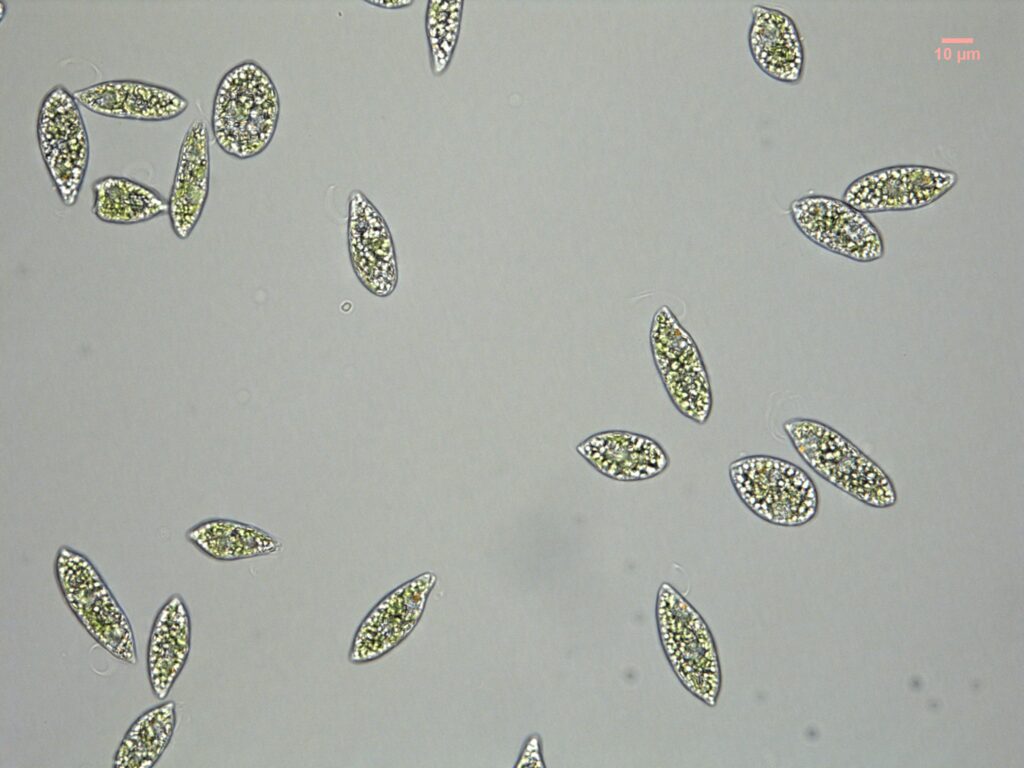 Humanity has constantly been looking to mother earth for ways to better our existence and further our development in science, health, technology, and sustainability.

We seek out aspects of mother nature’s make-up that may be able to cure cancer or help to make us live longer. We seek out ways that we can improve our technology and make it more sustainable.

So, it is no surprise that we find natural substances on our planet that can have different applications to better our lives.

One of these substances is the Euglena Gracilis, a form of alga that has the potential to serve many applications in our modern world. This alga has probably been noted for just over 100 years, however, applications are starting to seep through now.

However, Euglena Gracilis actually has much potential in many biofields, and may well change a lot of aspects of our lives without us really paying that much mind to it.

This tiny alga has synthesis and application beyond what you may think. But first, what is it exactly?

What Is Euglena Gracilis?

Euglena Gracilis is a species of single-celled freshwater alga. In terms of euglena structure, it is a mixotroph that is capable of feeding via photosynthesis or phagocytosis, and it has secondary chloroplasts.

Its cell surface is highly flexible which allows it to change its shape rather dramatically, making it capable of decreasing its size by 80%, and even changing its shape from a thin cell to a sphere!

It is a member of the euglenid family, which is a very common and well-known line of both freshwater and marine protists that are acknowledged by the presence of pellicles, which are a series of protein strips just under the external membrane.

Euglena Gracilis is one of many euglenophytes that are plastid bearing, they are easily defined as they have three membrane-bound photosynthesizing organelles, of which the genome will contain very potent green algal definition.

In layman’s terms, the Euglena Gracilis is simply an alga, which is commonly known and is capable of feeding in many ways, including photosynthesis which everyone will commonly relate to ‘plant-life’ in general.

Before we move on to its bioproduct applications and synthesis, let’s understand it a little bit more first.

Euglena Gracilis has been discovered for many years, however, it has recently been found to have many potential applications in biofields. It has become a popular candidate for application-focused research and potentially even commercial applications.

In the future it is possible that we will see its application in many fields, in spite of it simply being an alga, not so different from the many other Euglena algae, it has potential application as a dietary supplement, in some cases which we are already seeing.

This is because it is an excellent source of protein, vitamins, and so on. It is also already noted as being potentially marketable as being an immunostimulatory agent.

However, there are many cultivation conditions in which Euglena Gracilis could be produced, and there are many applications it has simply beyond dietary supplementation.

This alga has much in the way of positive potential in aspects of health and even biofuels, but we will get to that later.

Euglena Gracilis is being used a great deal in laboratories as a ‘model organism;. This is because a majority of species of Euglena have chloroplasts within the cell’s bodies, this allows them to feed as a plant through autotrophy, and photosynthesizing.

Yet Euglena also is capable of feeding heterotrophically, like an animal does, making the ability to consume and gain energy extra efficient.

However, its internal properties also hold much promise for applications in multiple fields. So, let’s consider where we are already seeing this alga being used and where we may see it be used in the future as well, as scientists consider its potential for biological application.

In recent times this unique unicellular microalgae has become highly regarded as one of the most likely potential candidates in the species as becoming a microalgal feeding stock for use in biofuels.

It has been discovered that its lipids, especially its wax esters, are very ideal for use in biodiesel and even jet fuels.

It must be noted that enhancing the productivity of its biomass is absolutely essential in order to create these more economical biofuels in a production system.

But it has been found that there are some bacteria that have been discovered to enhance microalgal growing as it crafts a more suitable microenvironment for extensive growth.

This has been studied and considered, however, it may be some time before we see the consideration and application of this alga being put to use. Yet, it has been proven in studies that particular bacteria can enhance the potential for enhancing the biomass of Euglena Gracilis for the purpose of biofuel properties.

While this is not the most prominent bio product that we see Euglena Gracilis being considered for, with the environmental crisis and the seeking of alternative fuels, it is promising to see that Euglena may have a part to play in a more economical and sustainable alternative to the current fuels we see.

Introducing a microalga as a biofuel does have potential, yet action on this is yet to be actively seen.

Euglena Gracilis has great stress tolerance, and this is something that makes it a much sought-after component in many bioproducts.

Commercially, of course, it has synthesized features such as lipids, provitamins, and essential amino acids, making it a great component for supplements (more on this later).

However, its natural ability to be exceptionally tolerant of external stress makes it very ideal. It can tolerate anything from ionizing radiation, and acidic growing conditions. It is even able to sequester heavy metals.

Its endurance and adaptability make it ideal for harnessing in bioremediation of polluted waters. This is something we will discuss in more detail in a moment.

However, it is well worth considering the depth of application of a component that is so hardy and durable, with extreme tolerance. This tolerance makes it ideal for many bioproducts and ensures consideration of plenty of applications that other sources may be too sensitive for.

There are many regenerative applications that Euglena Gracilis can be used for.

To start, it is likely to have a grand future in aquatic food systems such as fish feeds,  as well as converting carbon dioxide into oxygen, and curing water qualities.

Many studies of late show the positive effects on conditions in the cell multiplication of this particular microalgae, especially in aquatic foods.

However, it is also believed that Euglena Gracilis has the potential to cure polluted waters and assist in remedying waters that have levels of co2 which are exceedingly high. In many ways, this could be an application that can help to revitalize damaged environments.

Yet, there has been much consideration in aquatic food production, and studies have shown that this microalgae can produce plentiful biomass and is capable of converting carbon dioxide to oxygen in minimal light intensity for this process in particular.

As well as environmental and biofuel applications, there is potential for much more commercialization of Euglena Gracilis as well.

A great deal of research has been conducted into the commercialization of these microalgae, especially in application-driven research.

This is especially true in the endeavors for its use as a dietary supplement.

However, while we will talk about this more in a moment, it is worth noting that bioproducts from Euglena Gracilis have been shown that they can be produced under a vast array of conditions, and yields are usually pretty high in comparison with those that are looked at in microalgal arrangements.

The insights into its complicated metabolism have shown very individual metabolic routes that may provide science and biology with new premises for enhancing products with possible genetic modifications of this particular organism.

Use As A Dietary Supplement

Now, we know you’ve been waiting for this. We do know that Euglena Gracilis has made its way into the market as a dietary supplement already.

It is useful in this regard due to its many properties, especially in its proteins, provitamins, and its lipids too. It is known for being nutritional valuable in feeding for livestock and fish too.

However, there have been dietary supplements noted that focus on the microalgae, it is believed that it has the potential to improve the sleep quality and work efficiency of individuals who are suffering from excessive stress. Good news, right?

You can even find dietary supplements that include Euglena Gracilis online for commercial sale now, as it is known for being high in many positive attributes that humans need in their diets.

So while it is used for feeding livestock and fish, it is also ideal for use in supplements.

Application As A Supplement For Immune Function

On this note, one of the things that are sought after in Euglena Gracilis is the immune function assistance it provides. It is believed to reduce upper respiratory tract infections, which are often caused by colds, flu, and sinus infections.

Most of us experience these at least once a year, and it is possible that Euglena Gracilis is capable of increasing immune function and helping to reduce symptoms of URTI’s in most people.

There is much to be said about Euglena Gracilis in its potential for positive health applications, environmental impact, even agriculturally, and even biofuels, but there is more than just these factors to consider.

There is hope for Euglena Gracilis to make an impact and contributions to sustainable developments in industries.

Microalgae are one of the resources that show promise in the 5 F’s; food, fuel, fertilizer, feed, and fiber. Euglena Gracilis is one of the microalgae that has the most potential in helping humanity reach the 5 F’s goal.

It has already been used on a commercial scale for ingredients in foods and cosmetics and has undergone research in other fields too. We may be seeing more of Euglena Gracilis in the years to come.

Join our EAT Community to learn more from our knowledgable members, teachers, and coaches. This is one opportunity you would not want to miss!

Alternative Energy Sources – What is on the Horizon?

The post Bioproducts From Euglena Gracilis: Synthesis And Applications first appeared on Institute of Ecolonomics.

How To Fight Depression Without Medication
May 19, 2022