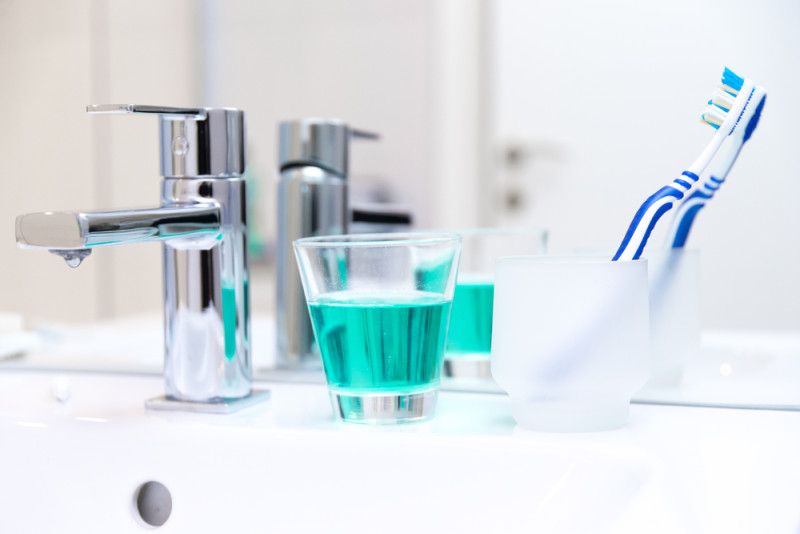 Rinsing with mouthwash is part of a daily routine for many. Oral care is important, but if you’re not careful, your mouthwash could be doing more harm than good. Listerine and other popular brands of mouthwashes containing alcohol have been proven to increase your risk of developing oral cancer. Close to 48,000 Americans, and more than 640,000 people across the world, are diagnosed with oral cancer every year. It can occur in the tongue, the floor of the mouth, the gums and the cheeks, and new research says that mouthwash may be partly to blame, thanks to its many harmful ingredients.

Most mouthwash contains alcohol, along with other toxins and chemicals that could be putting your health at risk, each time you gargle, hoping for fresh breath. In case you’ve never checked out the ingredient list on your mouthwash, here’s a rundown on just some of the chemicals that may be hiding in your minty rinse:

The good news is, a safer, more natural (and cheaper) form of mouthwash may be sitting in your kitchen cupboard. Researchers formed a study including participants with existing periodontal disease, and changed their diet to one emphasizing veggies, fruits, whole grains, potatoes, beans, peas, lentils and spices, with water as the preferred beverage. Researchers asked the participants to maintain their regular oral hygiene patterns, and studied the results. They found that eating healthier appeared to strengthen oral health.

We’ve all been told to stay way from sugar because it rots our teeth, but scientists are now finding that other foods have an impact on our oral health. Researchers found that rinsing with green tea strongly inhibited the growth of the plaque bacteria on teeth within minutes. After just seven minutes after swishing with green tea, the number of harmful bacteria in the plaque scraped from participants’ teeth was nearly cut in half!

When researchers tested chlorhexidine against green tea, they found that green tea worked better in plaque reduction. Without all of the harmful chemicals that mouthwash contains, green tea is clearly the safer choice when it comes to health. Consider ditching your mouthwash full of chemicals for a safer and more effective way to practice oral health.